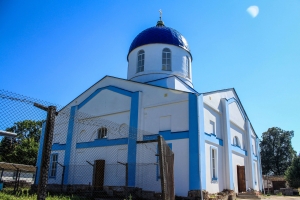 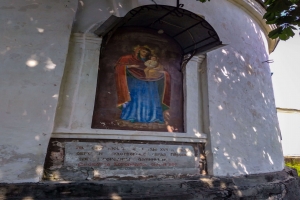 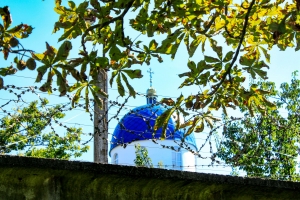 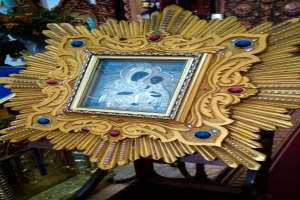 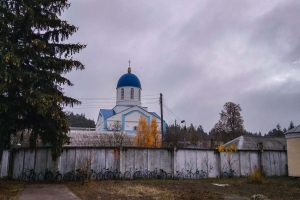 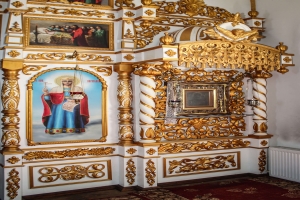 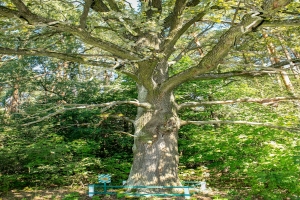 Buildings of Domnitskiy monastery did not immediately find, because it is located in the forest, near the village Domnitsa, numbering ... one resident!
The reason for building a monastery on this site has become an interesting story-legend. According to legend, blind girl with her mother went in the woods, where they got lost. Suddenly, the child heard a voice from somewhere "Come to me", to which she replied fearfully: "I am blind and do not know where to go." "Raise your head - and you will see." Raising her head, the girl ... saw the sight and saw an icon in the tree. The girl found the mother and they took their “savior” home and carried them to the church in their village. They called the icon by the name of the river, there flowed - Domnitsa - Jesus Christ Domnitskaya.
However, the icon, it is not clear how, again returned to its former place - in the forest. So, on the site of its appearance it was decided to build a wooden chapel where the icon would be kept. She saved the village of Berezno from the plague - people stopped dying after the icon was surrounded around the village three times.
The glory of the wonders of the Most Holy Theotokos Domnitskaya was carried far. The icon attracted the attention of not only ordinary people who came to her to be healed, but also patrons of the time. So on the spot, a wooden chapel in 1693 on the initiative and at the expense of the hetman Ivan Mazepa was founded Domnitsky Virgin Mary Christmas Monastery. Another hetman, Ivan Skoropadsky, built a new chapel for the miraculous icon, and later - the Church of the Transfiguration with cells and a refectory. By the way, in the altar of the Pyatnitskaya church under the floor, a tree stump was preserved, where an image appeared in antiquity.
Further, a difficult fate befell the monastery: only in the 20th century, he managed to open and close several times, then a commune, an agricultural artel, or a medical-labor dispensary, or a shelter for homeless children settled on its territory. During the German occupation, the St. Paraskevitsky Monastery was opened, which existed just over 10 years. In recent years, the territory of the monastery was a penal colony.
Since 1992, a new life of the monastery began - the church of Sv. Paraskeva, in 2011 - the Church of the Nativity of the Blessed Virgin Mary, which was completely renovated and in July 2016 the first service was held there. And through all the years has passed and the miraculous icon has survived to our days!
At 100 meters from the monastery beats the source, over which a well was built. She has a mini-bath built, there is always a bucket and a mug so that travelers can drink healing water. There are legends and traditions about its miraculous properties, as well as about the icon - be sure to ask the monks about them.
The highlight of the monastery is its neighborhood with ... a colony! From a distance it seems that this monastery is surrounded by barbed wire. In fact, the building of the temple fenced off with a grid around the perimeter at a distance of 2 m from the wall, and the territory of the colony surrounds it. So sinners and saints live in the neighborhood. By this time, the buildings of the bell tower and the cells (now the barracks) remained on the territory of the colony but were not transferred to the monastery. In the monastery there are only 4 permanent residents of the monks, and they give order to everyone, they also keep a part-time farm.
How to get there!?
To get to the monastery - go from Kiev along the Kiev - Gremyach highway, drive 140 km to Chernigiv (preferably to the bus station). In Chernihiv from the bus station every half hour buses go to the village of Berezna (another 30 km). In Berezne, you will not pass the “Nikolaevka” turn and from it, 10 kilometers among century-old oaks (nature monuments, by the way), you cannot fail to notice the blue domes of the monastery.
If you are not on your own car, then you can get to Berezna by regular buses, but beyond 10 km on your own: taxi, hitchhiking, on foot.
Coordinates: 51.487573, 31.7861724
Posted by: Victoria Nerush
Write a comment for this product!
Interesting places of this region (0)
Copyright MAXXmarketing GmbH
JoomShopping Download & Support
Search