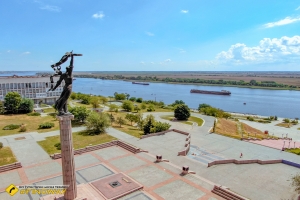 Park of Glory and riverside, Kherson 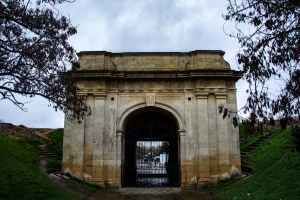 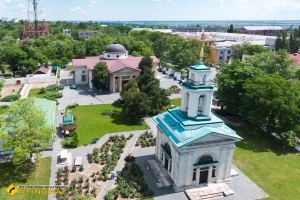 Kherson is a city that you will definitely enjoy. It is always attractive, home and for most residents - really native. Unlike the same Nikolayev, which is very long and reach from one place to another quite hard, Kherson is quite compact, it can be walked in a few days. The inhabitants share the city in several districts: "War", "Mlyny", "Zabala", "Kinda".
This city will always feed you with something tasty. Of course, here you must try Kherson watermelons, a variety of eggplant, fish and tomatoes.
Today, Kherson is considered a cultural and trade city. It is a trading house thanks to the sea and river ports, the sea and railway customs. These residents, in fact, also make a living. Kherson is famous for the Maritime Academy, the Maritime College, the Maritime School.
And in Kherson there was the largest cotton factory in Europe, the shipyards of Kherson was the first time in the world to use the construction of dry docks. And they were released until the time of perestroika. Today is the issue to update it all. Kherson began its industrial development in 60 years when the largest cotton factory in Europe was built. It produced towels, cotton fabrics, which were sold throughout the Soviet Union and even beyond. In addition, the non-liquid goods were already leaking onto the Union market; in the main, all products were exported. Khersons learned about the fact that they let such things out, by chance, when a certain hostess managed to get some kind of ugly piece of fabric. Now the plant, unfortunately, was destroyed, and in its place an entertainment center was built.
Kherson has always been a women's city. Many men are sailors who are constantly swimming somewhere, so there were some women in the city. At the textile plant itself, 30,000 women worked. In addition, fortifications were built around the city even earlier, where, of course, men were mostly men, and in order not to escape, they needed to be married. And then, at the initiative of the great strategist Potemkin in Kherson, at all kinds of fairs and parties began to invite the most beautiful girls from the outskirts. And they chose the best guys here. Local even sometimes boasts that they are the most beautiful girls in them.
The cultural center of the city is the Kulish Theater. Khersons very much love the theater and buy a ticket on the day of the performance is quite difficult. The hall is always full, with what, during the day there can be even a few performances: in the big hall and in the theater-cafe. The latter has a spacious foyer, tables are available, people can drink coffee and watch the show. All the holidays taking place in Kherson are attended by actors. Another cultural center of the city is the library, which hosts a variety of events.
In Kherson, there is a festival - the Malpolina of Tavria in May.
A peculiar "musthave" in Kherson is the visit of the seaport and the Potemkin Island. Especially in the summer, because there is a beach and even a small zoo. Be sure to make a trip on the Dnieper by boat. From the water the whole city is like in the palm. It is also worth visiting in the Greek suburbs, wander through squares and courtyards, to feel the spirit of Kherson - a trade, far from the capital, the measured life of the province.
Many famous people have been to Kherson or associated with it in a certain way. For example, if Chapayev Khersons were not cured, then we would not have such a character in history, because he was wounded during the First World War and was practiced precisely in Kherson. I visited here, in particular, Maxim Gorky. He stood up for a woman, to which some nasty people grabbed, and as a result, he was stuck in Kherson hospital for a long time. Unfortunately, such passionate stories are still there, since from the times when the fortress was built and the convicts were brought here, a kind of people of an associal type was formed.
Like any other city, Kherson has legends and mystical stories. He even has his own ghost. During the civil war of 1917-1918 it was calm, and then the Bolsheviks came to replace the Ukrainian state. Local feared their invasion and wrapped a monument to Potemkin, standing in a park near a theater, in a sackcloth. So he stood for a long time, a year and a half. And from that time this monument is called the Kherson Ghost.
Translation by: Irina Makukha
Copyright MAXXmarketing GmbH
JoomShopping Download & Support
Search