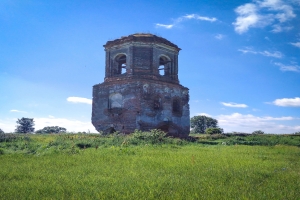 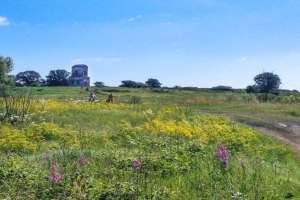 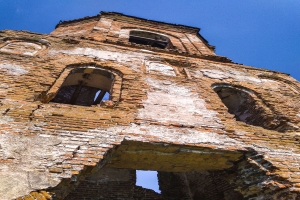 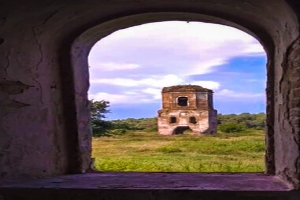 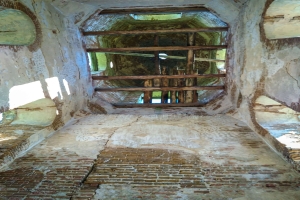 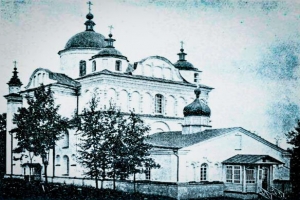 Suddenly, majestically for travellers near Desna river arise the ruins of the Maksakovsky monastery. To date, their location immediately seems ridiculous and incomprehensible.
On the left bank of the Desna, cut off from civilization, among the intoxicating field and swampy grasses, the 30 meter high building of the former bell tower - the entrance monastery gate rises from the roof; In the depths of the former monastery courtyard, the building of the hegumen was well preserved (or abbess, depending on how the monastery was in different years).
It is now a monastery has become the object of tourists who accidentally stopping by and the place that “black” archaeologists impinge upon.
And in its time, 300 years ago it was the most beautiful and richest defense monastery of Left-Bank Ukraine.
The approximate date of its foundation is 1659-1660. Conveniently chosen was the location - the monastery was erected on a high hill so that the flood waters of the Desna and its tributaries would not flood it. This same water was a natural barrier and an obstacle to the assault and plunder of the monastery. Why over the river? Because, firstly, it is a source of fresh clean water, and secondly, it is... an opportunity for monks to earn! The clergymen, monks were always smart and enterprising, and it was here that they saw an easy opportunity to earn money - to transport people from one bank to another (of course, there were no bridges across the broad flowing Desna). This area was inhabited since antiquity, so there were enough consumers of services. The monks also earned money on the cultivation of land, the census of books, and on donations from hetmans, centurions, and Cossack elders. One of these was the Mensky Cossack centurion Ignat Sakhnovsky, who went to the monastery to live out his years, died there under a new name.
Of the famous people lived here: the fluent Patriarch of Constantinople Seraphim from Turkey, Dmitry Rostovsky - a writer, a religious leader, the metropolitan, canonized as Dmitry Rostovsky.
For all 300 years, the monastery was rebuilt from wooden to brick, grew by new churches and buildings. And only in times of Soviet power fell into decay. In the 20-30 years of the twentieth century. he was handed over to the Sosnitsky Department of Education in order to disassemble and remove a brick for building schools. Books, an icon and all religious property were burned. Miraculously, one of the Trinity icons and the psalter saved by some of the “not respectable” performers survived and are kept in the local Mensky Museum of Local Lore.
People began to reach the monastery now, there were attempts from time to time to organize its territory, plant trees, cut down young growth. And more tourists travel to admire the "three hundred year old smiley" - it is the image of a person with two loopholes-eyes and a gate-mouth that resembles a bell tower. And here is a magical untouched nature - a river of lodges flowing along the Gum and completely covered with water lilies in summer, countless grasses on the meadows, and in the spring - a broad stream of the deep Desna River.
How to get there!?
The easiest way to get here by car is to the city. Mena on the highway "Kiev - Novgorod-Seversky". In Mene on the central square turn right and go to the village of Maxaki. The village stands on the bank of the Desna and has a pontoon bridge across the river, which is spread from June to October. At another time, it is impossible to get to the other side, or it is very dangerous (to cross the ice in winter).
Even simpler, after reaching Mena, rent a bicycle (there is a shop near the square that provides them) and go, admiring the views.
Coordinates: 51.4039043, 32.2092962
Translation by: Victoria Nerush
петро, 14.01.2021
могу помочь физической работой
по рестврации. пишите!
Write a comment for this product!
Interesting places of this region (0)
Copyright MAXXmarketing GmbH
JoomShopping Download & Support
Search