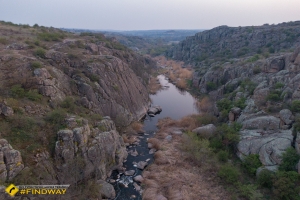 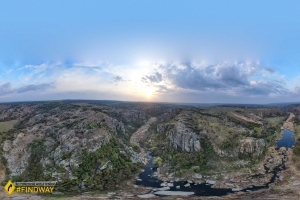 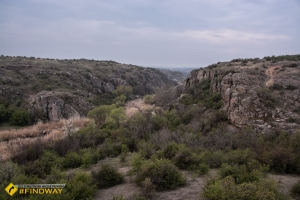 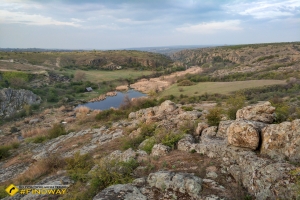 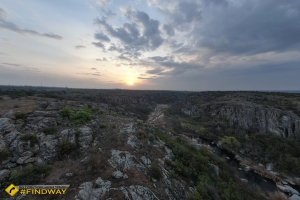 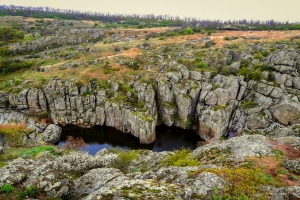 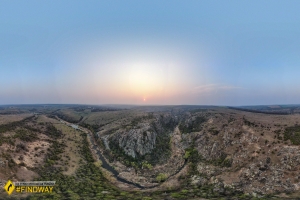 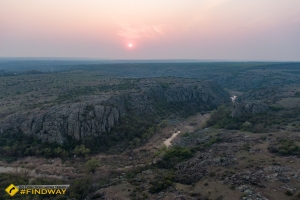 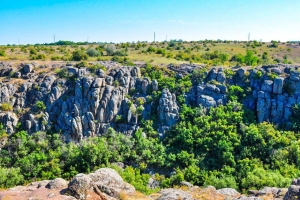 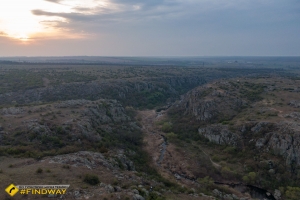 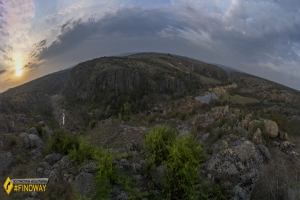 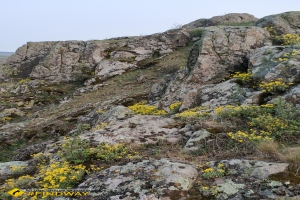 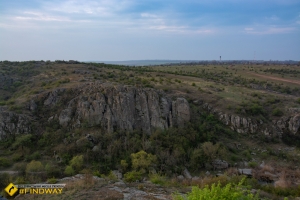 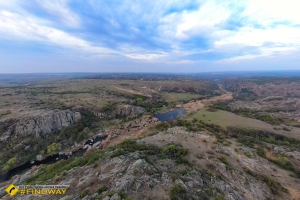 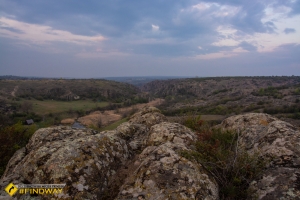 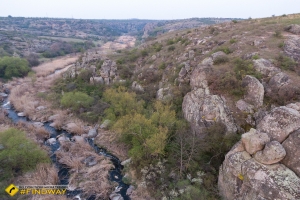 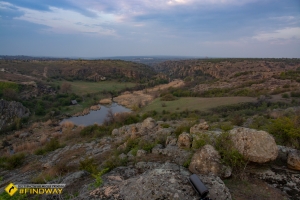 Imagine that you are walking in the steppe, flat, endless, where everything is visible for tens of kilometers. And somewhere in the middle of this steppe you find yourself on the banks of a canyon with a depth of 20 floors, with sheer granite walls, a rapids below and unique plants and animals, some of which are found only here. This is exactly what Aktovsky Canyon looks like.
This canyon is also called the “Devil's Valley”, and I believe that the name appeared because it is devilishly beautiful :)
Geology
Aktovsky canyon - part of the Ukrainian crystal shield, a huge granite platform, on which most of the country lies. Over billions of years, rain, winds, and later the waters of the river formed the walls of the canyon and stone pillars in it. The last glaciation did not reach here, which makes the formation of the canyon even more unique.
The river Mertvovod, which washed the canyon, was navigable just 100 years ago. In the 20th century, for the construction of collective farms several dams were made on the river and most of the water was taken for irrigation. Because of this the banks are overgrown with reeds, and the bottom is silted up. Now almost everywhere the river can be forded.
Nature
Aktovsky canyon - part of the national natural park "Bugksky Gard". People activity has hardly affected the local nature, and the unique microclimate (high humidity and coolness compared to the surrounding steppes) has formed a unique community of plants and animals. Some of the species here are mountainous. 30 representatives of flora are listed in the Red Book of Ukraine.
Many small species of animals live here - lizards, birds, snakes, turtles. Rarely you can meet deer and storks.
Most of the excursion groups visit only rocks near the village of Aktovo, so the nature of the canyon is in good preservation.
What to see

For some reason, Aktovsky canyon is served as an ideal place for extreme sports such as climbing, mountaineering, tourism in most descriptions. In fact, it is rather a place for a quiet holiday with a tent or an easy hiking trip. Photographers here also have something to profit from - the places are beautiful and distant, people are rarely here, and at dawn they get incredible peach-marshmallow shades.
The beginning of the Aktovsky canyon is a very promising, but not yet developed climbing area. Granite rocks are similar to those in the Buky Canyon, with its plenty of equipped climbing routes. There are many convenient places for future climbing routes in the Actovskiy canyon, mostly on the right bank of the river. Another plus in favor of this place is a spring and a large number of places for tents.
Upstream the canyon is less visited but there are three equipped routes 6a-6b. However, they are in a very poor condition, especially the top points. Approaches to the routes are also not very convenient, you have to walk on the water or jump over the stones where they are. Perhaps at the end of summer when the water level falls it will be more convenient.
For backpackers it makes sense to include this canyon in a longer route along the Granite-Steppe Pobuzhzha, because itself is can be traversed in one day and it is irrational to came here from some distant city for a one-day-trip. The route along the canyon passes mainly on the top and there are several descents to the river. Camping places located at the beginning and at the end of the canyon. Here the river Mertvovod is shallow (you can ford it) and even in early May it is warm enough for swimming.
A beautiful and logical route through the canyons of the Southern Bug river can be made for a bicycle trip including the rocks of Yuzhnoukrainsk, Aktovsky, Arbuzinsky canyons and the Trikratsky forest in 3-4 days. On bicycles, you can quickly slip through boring roads and spend more time on canyons. However sometimes you will have to carry bicycles, especially while crossing rivers - there are few bridges here.
Water tourists will be much more entertained in the neighboring Migee. In the Aktovsky canyon, Mertvovod river is very shallow, overgrown with reeds and inconvenient for kayaking. But if you have free time, you should definitely go for a day trip here.
The most photographed part of the canyon is its beginning near the village of Aktovo. But upstream you can find much more spectacular and interesting landscapes. At dawn and dusk, the granite pillars and walls acquire incredible warm shades, contrasting with the greenery and the dark ribbon of the river.
How to get there
By public transport: by train (Odessa direction) or by bus (there are routes from Mykolaiv, Odessa, Kyiv) to Voznesensk. From there by bus to the Trykraty village (buses may be irregular). It takes 30-40 minutes. You can drive straight to the canyon by taxi.
By car: on the Nikolaev highway towards Voznesensk, before it (if you go from Kiev or from the west) or after (if you call in from the east) turn according to the sign to the village of Trikraty. There is a road of decent quality to the village. In the village and to the canyon - pavement. If you want to see the rarely visited parts of the canyon - you need to drive the dirt road upstream. You cannot go to the the canyon by car.