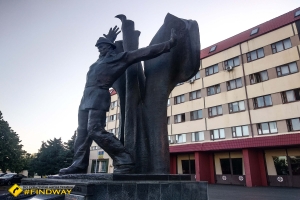 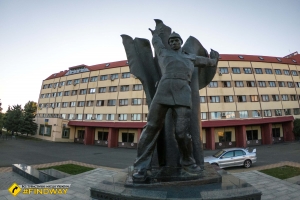 The Museum of Firefighting is located in Kyiv, the capital of Ukraine, and is dedicated to firefighters, their profession and equipment. The museum had its grand opening at the end of January in year 2004, in fire department #25, which was founded in 1970s, and back then it was the biggest department in Europe.

The oldest exhibits are wagons from 19th century that were used for fire fighting two centuries ago. They have always worked in pairs, so while one of them was used for transporting small machinery, shovels, axes and other equipment, on the other one barrels of water, pumps and hoses were transported, which worked by the used of physical force of the fighters. Other than that, big boiler was used that could create needed pressure to extinguish fire without using manual power, but to activate the boiler, it is needed to heat it for 15-20 minutes. Time is of essence in this craft, so the boiler was used only to fight very large fires.

Also are present automated samples of the firefighting equipment, which were used in twentieth century. Visitors can see photos of the first fire car in Kyiv, which was first used in the year 1913, based on the car model “Mercedes”. Also are demostrated samples of equipment based on chassis ZIS-5, which were used in Kyiv since the year 1986, аnd their modification from the year 1940, that had a special cabin for transporting firefighters. Also the museum proposes visitors to pay attention to the lesser exhibits - hand-held fire extinguishers, shovels, axes and so on, which belong to the different ages. Visitors can also look at the fire department itself.

How to get there?
Kyiv, Marshall Malinowski Street 6.
Translated by: Kateryna Polishchuk
Write a comment for this product!
Interesting places of this region (0)
Copyright MAXXmarketing GmbH
JoomShopping Download & Support
Search