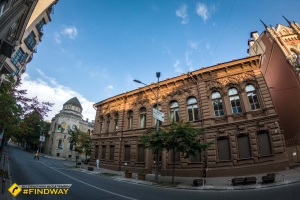 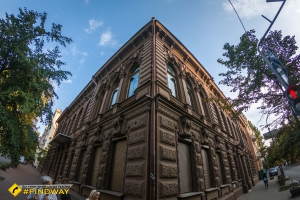 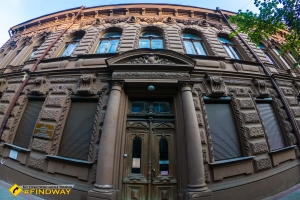 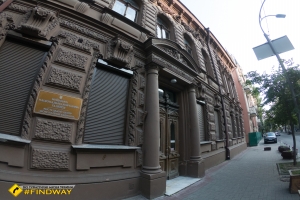 The sun sets, filling quiet Lipki with a special atmosphere of coolness and comfort. On the corner of two streets you can see a small but incredibly luxurious chocolate-colored house. How many he saw human destinies happy and sad over his centenary history.
History
It all started with the fact that one day, the famous businessman Mogiltsev, who was famous throughout Kyiv, bought a piece of land on Shelkovichnaya Street. He had significant fortunes from his enterprises, but was not burdened by his family. Therefore, he spent huge funds on patronage, but he himself loved to live in comfort. For the construction of the estate, he hired the famous architect Vladimir Nikolaev. Many say that the merchant built such a candy for official receptions. But actually - it was a gift to the girl whom he madly loved. She was married, and the house was supposed to hide the illegal relationship of lovers. That is why the estate simply radiates the energy of love and comfort.
Architecture
The chocolate house is modeled on the Florentine palazzo in the style of the Italian Renaissance. And this name was received for the characteristic chocolate color and texture of the walls. By the way, the furniture was also made of dark wood of chocolate color, as if supporting a sweet composition.
A small house on two floors with an extension, an attic and a basement cost Mogiltsev like an opera house in Kiev (half a million rubles). Inside, each room is individually decorated and had its own purpose. The largest and most luxurious is the white baroque room. Balls were held there to which the color of the Kiev intelligentsia was invited. And in the Art Nouveau room, ladies gathered before receptions. The ornaments on the walls and ceiling show Ukrainian motifs (periwinkles, poppies). Another secret of the estate is the mysterious portrait of Sarah Bernard on the ceiling. She repeatedly visited Kiev, which made a mad excitement among aristocrats. But why she was in one of the halls will forever remain a secret. Nearby is a hall in the Russian style, as well as another in the Byzantine. This room was the main dining room where respected people of the capital had a snack. Decorated with stucco in the form of garlands of fruits and berries. Nearby is a small hall - Moorish. Once upon a time, stars adorned its walls, but now they are simply painted blue. Furniture for the estate was made to order. Therefore, wall ornaments were repeated on all objects. And long marble elegant staircases lead up the mountain. If you rub the graceful railing and make a wish - it will undoubtedly come true.
Further life of the estate
The happy life of the estate ended with the life of the owner. The next tenant was the Ukrainian statesman Igor Kistyakovsky, but not for long. After all, the Bolsheviks came to Kiev seized by the revolution. One of the figures lived in the Chocolate House until 1925. After that, the room was divided into apartments and given to the use of a group of scientists.
In 1934, the estate was reconstructed and transferred to the All-Union Society for Cultural Relations with Foreign Countries. Later, the Chocolate House served as the Central Wedding Palace for a long time. Young couples enrolled in long lines. Everyone wanted to get married in a luxurious white room.
Not far from the estate was equipped with a new Shcherbitsky residence. Noisy wedding processions interfered with statesmen, so the registry office was moved to another place. And the chocolate house in disrepair was transferred to the department of culture. It was planned to organize a chess and checker club on the premises, but for the terrible state of the estate, this idea was not implemented.
Until 2009, a children's art gallery was operating on the territory of the Chocolate House. And only in 2009 did the long and much-needed restoration of the estate begin. The estate was completely restored, but, unfortunately, some parts of the priceless stained glass window with irises were lost.
In 2020, restoration work continued, but the estate became available for tourists and people of Kiev. Also, a branch of the children's art gallery was opened in it, it still functions. The estate hides the secrets of love and extreme success of the first owner (they say that the stucco molding in the form of the rod of Mercury brought him character), the secrets of brilliant scientists and party leaders. The walls remember luxurious ladies' dresses at social events and modest dresses of Soviet brides. He had happy days of prosperity and sad days of neglect. But now, he is completely safe under the protection of the people of Kiev who love him.
Write a comment for this product!
Interesting places of this region (0)
Copyright MAXXmarketing GmbH
JoomShopping Download & Support
Search