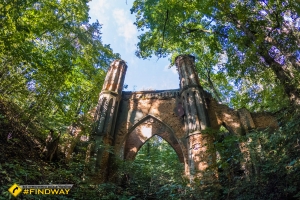 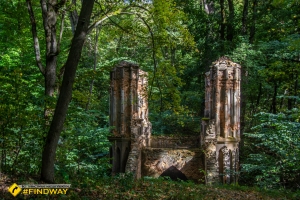 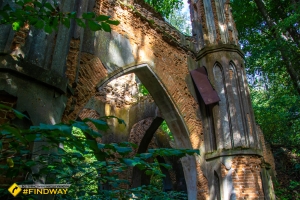 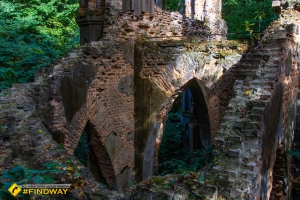 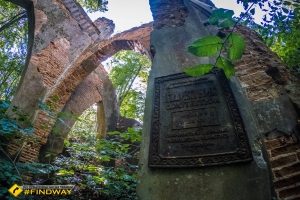 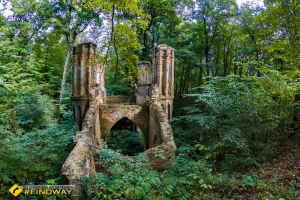 The history of the palace and park complex
Around the palace there is a wide park with an area of ​​427 hectares with a large pond, rotunda, arbors, Gothic Red bridges. In ancient times, the park was so large that beyond the pond it simply merged with the forest. The Austrian gardener Bisterfeld worked on the creation of a unique park. The park is based on an old forest above the river. After working on the park complex, the construction of the palace began. The architect of the palace complex was the famous architect Pavel Dubrovsky. The result of their work was a common creation, which is still considered one of the best examples of palace and park architecture of the Left Bank of Ukraine in the early 19th century. In the past, the park’s landscape was also complemented by other park buildings, which included - another gazebo, a church with a bell tower and a chapel, which, unfortunately, have not survived to our days.
Gothic bridge
The ruins of the stone bridge are one of the few surviving parts of the Galaganov estate and the main attraction of the village of Sokiryntsi. The bridge is located in the thickets of an ancient park and used to lead directly from the estate to the shore of a large pond.
The bridge was built in the early 19th century according to the project of the architect Dubrovsky. It should be noted that the palace itself and the buildings surrounding it were built in the style of classicism, but when building the bridge, the architect used the canons of the Gothic style. The bridge is made of stone. It has three arches and is supported by four three-tier pylons. Unfortunately, only ruins have survived from the bridge to this day. But now it is an important architectural attraction and allows you to feel the former grandeur of the palace and park complex.
To book a tour, call +38 (067) 782-52-64, Olga Vasilievna.
How to get there:
by car:
- from Kiev to the village Sokirintsy should go along the highway Kiev - Sumy (H-07) through Priluki. Further along the highway about 30 km before turning on to Sokirintsy.
- from Sumy, you should go on the H-07 route through Romny. Leaving Sokyryntsi from Chernihiv, follow the M-01 highway to the village of Kiptyava, then continue on the M-02. After driving 12 km from the village of Likhachiv, take the R-67 route and follow Ichnia and Trostyanets.
by public transport:
- get to the city of Nizhyn. There is a daily bus service from the Nizhyn bus station to Chernihiv-Sokyryntsi, which arrives to Nizhyn at 18:20. You should take the Sokyryntsi-Chernihiv bus departing daily at 5:00. He arrives in Nizhyn at 7:35. From Nizhyn to Kiev it is possible to reach by train at 8:45.
Write a comment for this product!
Interesting places of this region (0)
Copyright MAXXmarketing GmbH
JoomShopping Download & Support
Search