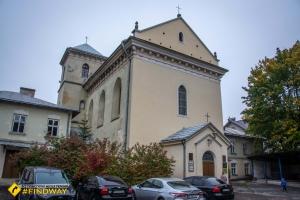 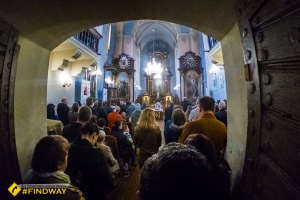 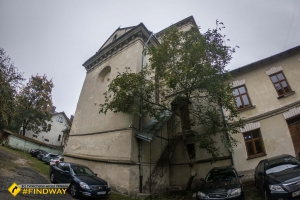 We recommend you to visit Divine Liturgy which happens every Sunday. It is accompanied by men`s church choir called «Dudaryk». Temple acoustic makes their signing even more pleasing.
The history of the temple
Temple`s history has started since 1616 when Marek Sharfenberger-Ostrogorski decided to build a hospital named after st. Lazarus. There were 2 wooden houses and a chapel. One of the houses was for a priest and the second one was for ill people. Since 1634 by the Nutclauss Vaberene’s project people started to build the temple though it had masonry already. Sooner they build fortifications behind the hospital by Jan Tomash Josefowich`s project. You can still see them from the side of Copernic, 27 street. In 1847 the building was used as a metal products factory of J.Schumann.
In Soviet Union there was placed a school of car driving and the room was badly damaged. Then people made huge repairs. And only in 1989 it was given to men`s church choir of Lviv «Dudaryk». From now on children and young people are studying in those rooms which are adjacent to the temple.
Architecture
The temple is built in Renaissance style and has some of Gothic`s (the buildings of the hospital are adjacent to the temple on two sides and form a complex of buildings that are interconnecred. The temple is made of stone, in the shape of a rectangular parallelepiped. Gothic lancet windows are arranged on the facades and towers.
From all the property only pipe organ and two main altars left. Rest of it was gone or destroyed during the World War II. Currently the pipe organ is stored in the Lviv Museum of the History of Religion. Below the walls of the monastery is an ancient well decorated with stone lions of the 18th century with shields of Lviv patrician families. Reliefs with biblical scenes about the rich man and Lazarus have been preserved on the wall of hospital, as well as a rare plot depicting God the Father with Jesus on his knees.
How to get there?
The temple is situated in the south of the historic center of Lviv on the Copernic, 27 street. It is difficult to see the temple from the main street, because of the surrounding walls. To get there you need to find the entrance from the Grabovsky street. Public transport you can use buses № 21, 24, 42, 43. There is a bus stop right next to the temple`s gate.
Translated by: Nika Makovyak
Write a comment for this product!
Interesting places of this region (0)
Copyright MAXXmarketing GmbH
JoomShopping Download & Support
Search