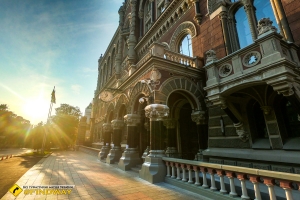 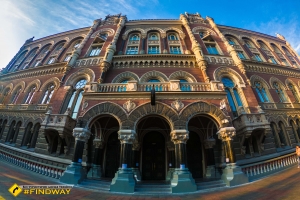 National Bank of Ukraine is one of the financial establishments of Ukraine, an independent institution that serves as a central bank in Ukraine, based in Kyiv - the capital of Ukraine, on Instytuska street, 9.
The history of Ukrainian bank
The concept of the state bank is relatively young and appeared in the new history of Ukraine. The first prototype was created back in the times of The Ukrainian National Republic (UNR) and The Hetmanate, but with the Bolsheviks authorities the bank activity was forbidden until 1921, at the end of which the one State Bank of USSR appeared.
The question of creation the central bank arose with the formation of independent Ukraine. It appeared from Ukrainian republic office of USSR State bank and its main functions included the control and the emission of the sole currency of Ukraine – Hrivnya, the development and installation the effective credit-monetary politics to the state economy, etc.
The office of the State commercial bank in Kyiv was created back on the terrains of the Russian empire in 1839. Instytutska street became the place of accommodation, which was in property of Kyiv nobility, where a two-floor Empire styled house was found. The amount of financial operations grew with time, so the need in a new, bigger in the area building appeared. The leadership decided to build the new place of the same street, on the neighboring plot of the valid building at that time.
The architecture
All affairs were transferred to the new building on August 1, 1905, though it being sanctified only on February, 22 in 1906. Even now the building forms the main front of the architectural complex of Instytutska street and closes the perspective of Bankova street. The building has a valid value among all the architectural sights of the capital and is one of the main figures in the art-architectural ensemble of Lypky - the ancient district of Kyiv.
But in winter 1934 already the building was decided to be expanded, among all the projects architect’s Rykov was chosen. The Italian artist Elio Salya was responsible for artistic framing. So called “cartouches” - shield-shaped sculpted decorations, which portrayed the emblems of different families, were placed around the whole building. The picture of Archistrategist Mykhail initially painted on glass was renewed in the center of the main room of the building. The National bank of Ukraine is recognized as one of the most accomplished buildings of the XXI century. Apart from that, it still plays a significant role in the shaping of the architectural ensemble of the governmental center of the capital.
Translated by: Sofiia Khodieva
Write a comment for this product!
Interesting places of this region (0)
Copyright MAXXmarketing GmbH
JoomShopping Download & Support
Search