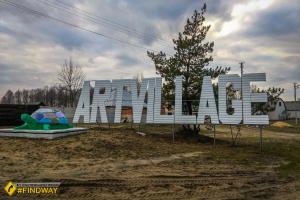 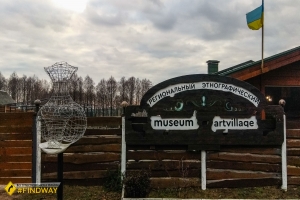 Do you ever wish to see ancient things or at least for a moment to find yourself in the distant past of our Slobozhanshchyna?
If you answered "yes" to any question, then I invite you to travel in time to the village Artiukhivka, which is in the Zmiiv district. It is here that the Regional Museum of Ethnography of Slobozhanshchyna, whose director believes that exhibits should be freely available to all comers.

The museum was open in October 2019, but has already become a popular tourist destination. This glory went to the museum because of the unique exhibit, which occupies a central place in the museum's exposition. And it is a vintage 1880 Louis Witton chest. According to the director of the museum, this chest was located in the nearby village of Mokhnach for a long time, where it was used solely for household purposes - it stored corn. The chest is not in perfect condition right now, but the inscription “made in France” is very well preserved. But the biggest mystery is how such a chest got to the Zmiiv district of Slobozhanshchyna ...

Versions of the appearance of the chest
There are currently two unconfirmed versions of this chest in our region. One of them may be related to the events of 1888, when the royal train went off the rails at the station Spasiv Skyt in which the family of the Russian emperor Alexander III was almost killed. Perhaps this chest belonged to someone from the king's entourage.

The second version is related to the events of World War II, when fierce battles were fought in these lands with German troops. Perhaps during the retreat the Germans left all that was too heavy.

Museum Exposition
At the moment, the museum has around 2500 exhibits from different times and eras. In the museum you can see things from the times of the Scythians, the Cossacks, the First and Second World War, the tsarist period and more. In addition to Louis Witton's chest, we want to single out cold weapons. Here, unlike other museums, you can even hold an officer's German sword and a 1936 German saber in your hands.

The museum has in its exposition an ancient piano that came to Kharkiv sometime in about 1956-1966 when the Zmiiv thermal power station was built. It is rumored that this musical instrument belonged to one of the governors of the city of Dnipro, and maybe even to Hryhorii Potomkin.

In fact, it is possible to write and talk about the museum's exhibits for a long, long time, and it is necessary to see everything with your own eyes, because there are gramophone records, paintings, ancient icons, VII century coins, utensils, rifles, knives and many more interesting things.

This world is too interesting to sit at home. Enjoy your travels and unforgettable experiences!
Museum Address: Zmiiv district, village of Artiuhivka, 60 Heroiv str
Working hours: Sunday from 10am to 4pm
Admission: free
How to get there?
By train from Kharkiv - Passenger or Kharkiv-Levada railway stations to the station Levkivka or Zmiiv according to the railway schedule. Then walk about 7 km according to the navigation device.
Translated by: Roman Zubrytskyi
Write a comment for this product!
Interesting places of this region (0)
Copyright MAXXmarketing GmbH
JoomShopping Download & Support
Search