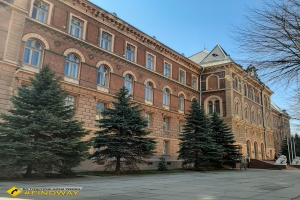 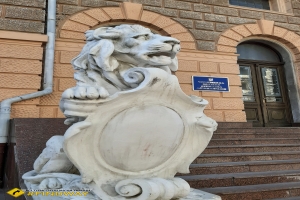 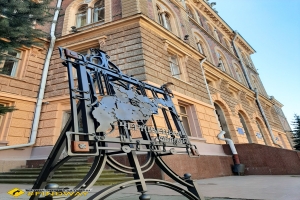 This building has lot of names. The "Palace of Justice" or "House of Lions" are two of them. Now, officially, this is the Chernivtsi Regional State Administration. But it will always stay the "House guarded by lions" for tourists. It is definitely one of the most beautiful places in the center of Chernivtsi. There is a majestic architecture, sculptures and the historical significance of the building.
History
It was originally built as the Palace of Justice (Court) in 1904 - 1906, when the city was ruled by Austria. Before that Chernivtsi did not have a separate court, so the sessions were held directly in prisons. You can see the sculptures of two ancient goddesses on the main facade: the goddess of justice Themis, and the goddess of revenge Nemesis. There is an interesting story about lions. At first, they stood before entering the court. They say, criminals, to get to the court, needed to pass between the lions, but the rest of the people passed through the entrance nearby. However, in Soviet Union times, the lions were transferred to the parapets.
Today
Nowadays this house is not thrown away by any guide. You may even hear different legends and myths related to the past of this building. In 2013-2014, the front of the house was damaged due to the events of the “Hidnist Revolution” (also it is called Maidan), but soon after these events it was repaired and the original appearance was restored. This is the current regional administration now.
How to get there?
From the train station:
You could use all trolleybuses and all route taxi. You need to get off the transport at the Bozhenko bus stop. Then you should go up the street to the central square, after that turn left, and passing the T. Shevchenko monument cross the road and go straight on the Universytetska Street till you see the first turn to the right. Then turn right to Stepan Bandera Street, and go straight to Chernivtsi Regional State Administration. It will take 10 - 15 minutes from the train station to the Theater Square.
From the bus station:
- you could use buses # 11 \ 12 and get off the bus at the “Kinoteatr Chernivtsi” stop. Then you need to walk down the S. Bandera Street for 2 minutes to Chernivtsi Regional State Administration;
- also you could use trolleybuses №6а \ 3 \ 3а \ 5 \ 11 and get off the trolleybus at the “Soborna Ploshcha” stop. Then walk down the Kotlyarevskyi Street directly to the Regional State Administration.
Translated by: Kateryna Polishchuk
Write a comment for this product!
Interesting places of this region (0)
Copyright MAXXmarketing GmbH
JoomShopping Download & Support
Search