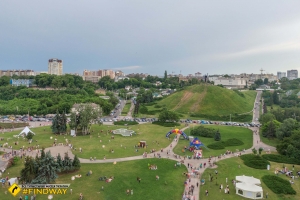 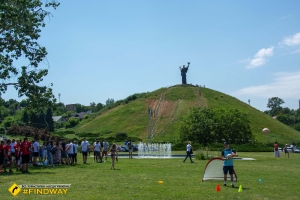 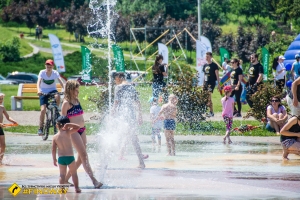 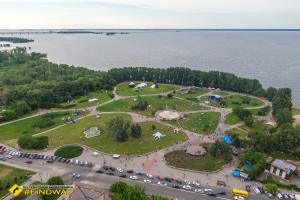 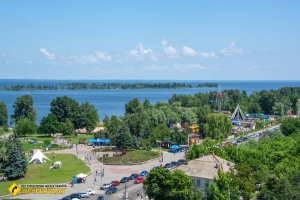 History of the district
This area of ​​Cherkasy is called Mytnytsia. Formerly, long time ago, there was a crossing over the Dnipro in that district and Cossacks were collecting customs duty there. When the Kremenchuk Reservoir was built in the mid-1950's and 60's, Mytnytsia was flooded, but then a part of it was reconstructed.
Taras Shevchenko was here in 1869 and drew this place. These pictures show what is not preserved - the chapel and the Mytnytsia area itself. Now this area along with “Dolyna” is on the sandy banks. There are not many roses there today, because the locals dug up all the valuable species of roses. However, before the 1990s, everything was covered with roses there.
Nowadays
From the “Pahorb Slavy” hill there is a beautiful view on the landscape park “Dolyna Troiand”, a monument of park art in Ukraine. The park is located on the bank of the Kremenchuk reservoir and not far from the central part of the city. In the park there are small lakes with fountains inside. Since 2012, the sculptural composition “Bird” has been installed. Forged from iron crane functions as a sundial and in clear weather its accuracy can be checked.
How to get there?
The park is located near the Riviera city beach. To reach it you need to go by bus (#11, #21 or #36) to the “Dolyna Troiand” stop.
Translated by: Pauline Shkuryna
Pauline Shkuryna
Write a comment for this product!
Interesting places of this region (0)
Copyright MAXXmarketing GmbH
JoomShopping Download & Support
Search