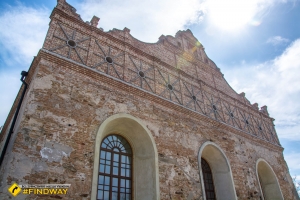 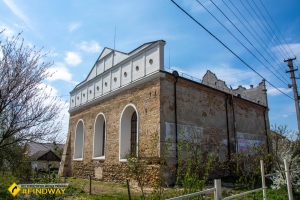 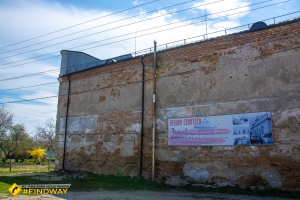 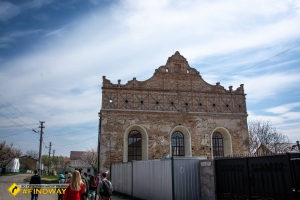 History
It is unknown when the synagogue was built and when it started to funcionate, but scientists assume that the basement of this building was laid in the 1400s. According to the historical data it is exactly known that the great synagogue was in 1603 and there was the printery which worked more than 200 years, but it was soon closed, because the manifests of the Polish rebels were printed there. The synagogue was renovated in 1610 at the expenses of Shmuel Eidels Maharsha, who was a Jewish saint in whose honor the synagogue was named for a long time, and he was considered the saint in his life. The school of the Rabbis "Yeshiva" functioned approximately at the same time and it was the best of the schools in all Rzecz Pospolita.
The building was almost destroyed because of fighting during the World War II.  The synagogue was transformed into a warehouse in the 1960s. The east side of the building was completely destroyed as well as the most part of the north one and attic of the west facade and the prayer hall was only preserved them. The reconstruction of the synagogue is ongoing from 2016 till now at the expenses of philanthropist and locals.

Architecture
The synagogue is rectangular in projection of the building that is topped with the high attic and two gables.
The main part of the synagogue was the high prayer hall that was covered with the vault, which are supported by four pillars.
The hall was illuminated in the past through 12 windows, which were, unfortunately, completely destroyed during the World War II.

Interesting facts
Local citizen and ethnic Jew Grygoriy Arshynov has been renovating the synagogue for 20 years. He is a professional builder, who started to renovate the historical building, and he invested in the restoration more than 180 thousands dollars

How to get there?
The synagogue is located at Chaikovskogo St. 8, Ostrog, Rivne region
By public transport:
By bus from Rivne to Ostrog (every 1,5 hours)
From railway station:
By train 6354 (at 8:37 from Rivne)
or by another one 6284 (at 12:27 from Rivne) 6286 (at 17:36 from Rivne)
By car: from Kyiv or Lviv go on the highway M-17 (Kyiv-Chop) to Rivne.
Therefrom go on road P-98 to Ostrog.
It's not hard to find the great synagogue, because there are pointers everywhere or the locals can explain you, how to get as they are used to tourists.
Translated by Ivan Antoniuk
Write a comment for this product!
Interesting places of this region (0)
Copyright MAXXmarketing GmbH
JoomShopping Download & Support
Search