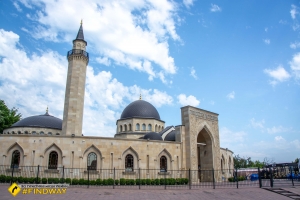 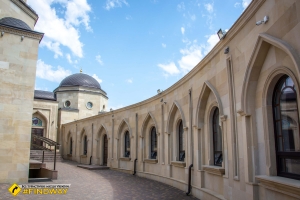 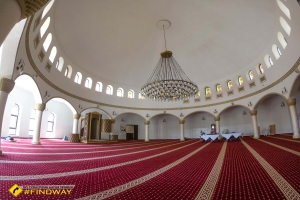 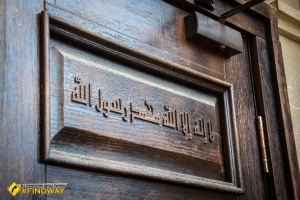 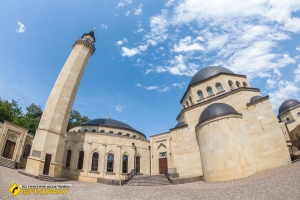 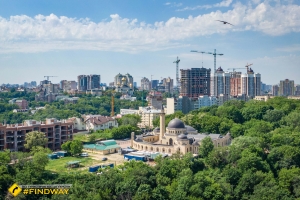 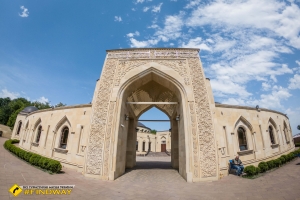 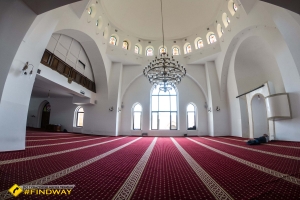 The Ar-Rahma Mosque is the spiritual center of the Muslims of Ukraine
Kyiv Cathedral Mosque "Ar-Rahma" is a pride of Ukrainian Muslims and a visitor of Ukraine in the Islamic world. It is the first and only mosque in Kyiv in the recent history of Ukraine, it is one of the largest mosques in Europe. The Ar-Rahma Mosque was built in the historic center of Kiev in the area where Muslims lived for a long time, as the name of the locality - Tatarka - indicates.
"Ar-Rahma" in Arabic means "mercy."
The first stone of the mosque was laid in August 1994, during the First Congress of Muslims of Ukraine. The initial phase of construction was completed in 1998, and in 2000, a crescent moon was erected on the mosque's dome, and since that day the temple has opened its doors to parishioners. The grand opening of the already completed complex took place on December 2, 2011. An interesting fact is that Muslims of different ages and social groups, including ambassadors of Muslim countries of Ukraine, participated in the construction of the mosque.
The Ar-Rahma Mosque is a pearl of Islamic architecture
The architect of the mosque, Alexander Komarovsky, designed the complex together with a consultant from Syria - Ridvan Majzub. After Komarovsky's death, his development was implemented by Sergei Babushkin in collaboration with well-known architect Hoxh Ahmad Dadaev. As a result, thanks to the efforts of many specialists, it was possible to combine the classic Oriental traditions with modern construction technologies and design solutions. Thus, the mosque of Ar-Rahma is recognized by experts as a pearl of modern Islamic architecture. Above the main entrance to the building of the mosque is inscribed in Arabic, which means "There is no creator except one and only God, and Muhammad is His Prophet." Also on the wooden doors of the prayer hall are the carved souls (prayers) which it is desirable to read when coming to the temple: "O Allah, open me the gates of Your mercy and give me knowledge."
The mosque's halls are decorated with large chandeliers brought from Turkey. On each glass ceiling are engraved the names of God - "Allah" and the Prophet - "Muhammad", and on each metal rim - the expression from which each Surah of the Qur'an - "Basmala" begins only for believers in the One World". A stone was used for facing the mosque, which was specially brought from Azerbaijan. The choice fell on him, because it is best suited to local climatic conditions.
Ar-Rahma holds up to 3,000 prayer houses
A carpet for a prayer hall measuring more than 1,000 square meters was brought from Turkey. The mosque has 3 halls, within which there are 24 circular columns. The first hall has a dome with a diameter of 6 meters and a height of 6 meters. Above the second hall is a flat dome with a diameter of 22 meters and a height of about 3 meters. In addition, the complex has 7 domes 1 to 2.5 meters high. All domes of the mosque are covered with copper. The windows under the main domes of the mosque are made in stained glass.
The area of ​​the mosque is 3200 square meters
The mosque has two mihrabs - recesses in the wall that indicate the direction for Namaz, and two mints - the rise from which the imam leads the sermon. The minaret is 27 meters high. In the inner courtyard of the mosque is a minaret - a tower from which believers are called to prayer. Inside it are spiral staircases of 118 steps. Thus, the muezzin must be climbed to the height of the 9th floor to inform the believers of the time of Namaz.
The holy relic of Muslims is stored in the mosque of Ar-Rahma
One of the greatest treasures in the mosque of Ar-Rahma is the holy relic - the hair of Prophet Muhammad... Thus, the Muslims of Ukraine have an exceptional opportunity to make tabbaruq (blessings with relics) in their home country.
"Ar-Rahma" is the spiritual center of Muslims
In order to unite the multinational Muslim society of Ukraine on the basis of the traditional values ​​of Islam, events dedicated to Muslim events and holidays are regularly held at the mosque. Every year, throughout the month of Ramadan, Muslims gather for iftar (dinner-talk) to end the fasting day in a friendly and warm atmosphere. Also on the occasion of the birth of Prophet Muhammad, the mosque is held annually by Maulid. The mosque holds wedding ceremonies (nicknames), the name of the bride, the genesis (Islamic funeral ritual), the treatment (the hand). A Hutba (Friday sermon) and Jumah Namaz are held on Fridays.
How to get there?
You can reach the mosque by subway to Kontraktova Square, then walk along Nizhny Val, Olegovskaya (or Lukyanovskaya) streets.
You can also get from the Kontraktova Square metro station by shuttle bus №417 or № 432, or by tram №14 or №18 to the “Solyana Street” stop, then walk up Lukyanivska Street.
Write a comment for this product!
Interesting places of this region (0)
Copyright MAXXmarketing GmbH
JoomShopping Download & Support
Search