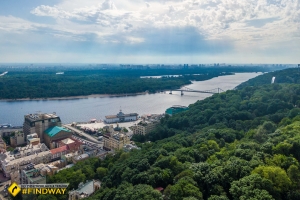 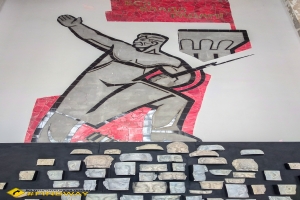 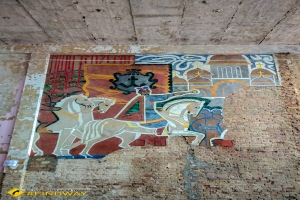 Kyiv river port is a main transport node and a port for river transport. It is situated in the historic region of the capital of Ukraine – Podil, which used to be the trade-crafting centre of Kyiv long ago. The goods exchange took place mainly on the main river artery of Ukraine – Dnipro.
The building of the river port began in 1957 and finished in 1961. The house has 4 floors, only two of which are seen from Poshtova square. Historically the first two floors played the role of the port by itself. Administrative and household services, left-luggage and box offices were situated there, while the top floors included a post, a restaurant and a café. There is a big tower near the building, where professional functional equipment – communication devices, transceivers and others – were kept. They were needed for ship control and direction on Dnipro river. The river complex is decorated with unique themed mosaics inside: “Dnipro – trade road”, “Gulls above the sea”, etc. Their style was typical for that art epoch.
The building was closed for reconstruction in 2012, but in 2012-2015 it became neglected, until in winter 2016 the reconstruction didn’t begin because the owners changed. The project was supposed to turn the building into a modern shopping and entertainment complex with restaurants and night clubs, but the reason for it remaining unactualized are unknown.
The building had a status of a non-opened architectural monument since January 2016, until its opening for the visitors in 2019 as an art center, that became a place for art objects and a freshly created gastronomic gallery on the birth in front of the port.
Translated by: Sofiia Khodieva
Write a comment for this product!
Interesting places of this region (0)
Copyright MAXXmarketing GmbH
JoomShopping Download & Support
Search