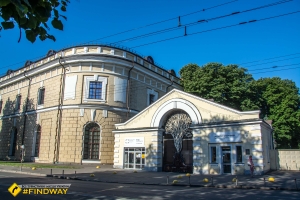 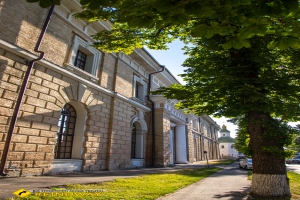 Mystetskyi arsenal is a cultural and artistic platform. It`s a museum space located at 10-12 Lavrska Street. Legally it`s under the jurisdiction of the State Directorate for Affairs. It began its work on May 22, 2006, as a project of Ukrainian President Viktor Yushchenko. With aim to create an exemplary museum, cultural and art complex of international level, which together with neighboring monuments, such as the Kiev-Pechersk Lavra, would create a new cultural and artistic face of the capital of Ukraine.

The main purpose of creating the complex was to make space for family leisure and to accumulate, store and distribute Ukrainian culture, and also to ensure the restoration of the integrity of Ukraine's cultural space.

In 2007, the complex became free to visit. A few years later, it was on reconstruction, but even then it became an interesting place for residents and guests of the capital.

The history of the Mystetskyi arsenal building begins in 1712 in the building of the Voznesensʹkyy Convent, where it was built, and the room of which was originally used as an artillery arsenal for ammunition storage. Since 1768 it was used as a place for manufacturing the guns and equipment for them. In 1750, Empress Elizabeth signed an order to create a large "shop" in Kiev, and in 1764 an "Arsenal Team" was formed, which belonged to the Kiev garrison. And then, only in 1784, the very building of the arsenal was laid, which became the first example of the architectural classicism in Kiev. But after a long construction process, it was completed just in 1803, and it was immediately transferred to the command of Major General of Artillery Poletaev. Since then, the room of the arsenal has been used as an ammunition depot and its space was used for specialized weapons production workshops.

Just before the space was transfered for modern use, archaeological excavations were carried out in the territory of the arsenal and more than two hundred and sixty burials were found, after exploration of which the arsenal building became a cultural and artistic complex, which is still operating today.
Translated by: Darina Stepchenkova
Write a comment for this product!
Interesting places of this region (0)
Copyright MAXXmarketing GmbH
JoomShopping Download & Support
Search