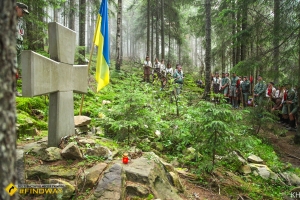 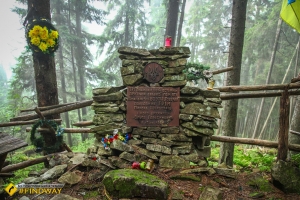 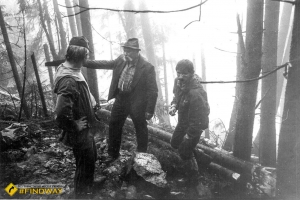 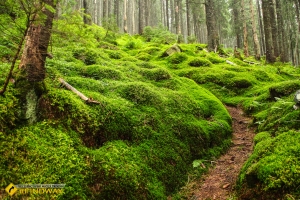 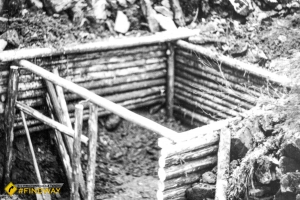 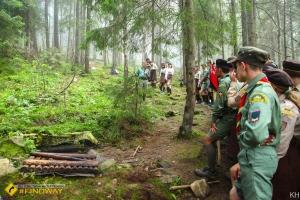 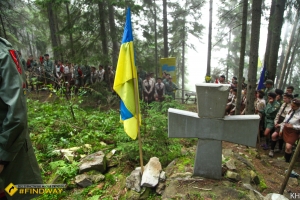 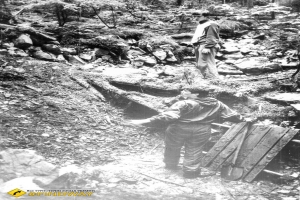 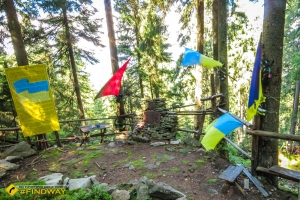 The Colonel Hrim`s bunker or Hrim`s Kryyivka- the last UPA`s Kryyivka in Ukraine. It was situated on the Berezovachka mountain slope, in the Nadvirna district, the Ivano-Frankivsk region. When the NKVS attacked that bunker on the 17 of May,in 1954, the UPA stopped existing.
The history
Kryyivkas- are the military-defense structures of Ukrainian Rebel Army (UPA - Ukrainska Povstanska Armiya), which were built underground. Especially they were common in the times of the war with punitive bodies of USSR. Kryyivkas were projected for military cover functions, hospitals and for storage of equipment and weapons. Also they were used as food bases for the saving civilians in the times of Holodomor 1946-1947. The Bunker on the Berehovachka mountain was built in 1953 at the altitude of 1320 meters, over the Bystrytsya river. The Kryyivka was safely hidden in the trees, it was covered by moss, despite the fact, it was next to the trail. In 1954, the commander of the Fourth Military District of the UPA-«West» Hoverla, the head of the Carpathian region's Security Council and the head of the armed resistance movement of the Carpathian region, Colonel Hrim, with his wife Olha, Anna Popovych, Dovbush and several other rebels, stopped here.
Dovbush has agreed to meet with Ostap on the 5 of May. But Ostap did not come. Dovbush was caught on May 12. He was interrogated to follow the commander's trail, but Dovbush remembered the arrangement with Hrim: if Dovbush doesn`t return by May 16, the commander and his brothers will have to leave the Kryyivka. Therefore, on May 17, Dovbush and chekists blocked the bunker. Dovbush didn't know that Hrim hadn't left the kryyivka.
Anna Popovych (nicknamed “Rose”) was the first who heard footsteps over the bunker and, having understood what was happening, reported it to Hrim. The commander answered her: "Well, Popovych, we are ready." The Chekists tried to persuade the commander to surrender for a long time, but they failed. Almost at the beginning, Olga, the Hrim's wife, shot herself in order not to fall into the hands of the NKVS. A little later, Hrim also decided to kill himself with the last bullet he left, but missed. He ordered Anna Popovych to finish him off, and she fired at the commander three times. After a while, Hrim was no longer stirring, and Anna fainted too. Anna Popovych fell into the hands of the Chekists. She was interrogated for 2 years and assigned 10 years of concentration camps with confiscation of property. Dovbush, Yarkyi, Derkach and Dub were sentenced to death. But they shot only Dovbush, because only he didn't write a request for a pardon.
Tribute to the Memory
In 1991, under the leadership of Mykhailo Zelenchuk (Derkach), who had spent the winter with Commander Hrim and miraculously escaped during the siege, a group of people searched for an abandoned and destroyed bunker. Then the volunteers decided to restore the historical monument. During 1991, most of the restoration work was done. On the 17 of May 1992, a solemn memorial council was held near the kryyivka in honor of the victims of Mykola Tverdohlib “Hrim” and his wife Olha Herasimovych.

Two biographical films were made about Anna Popovych: "Chronicle of the Ukrainska Povstanska Armiya 1942-1954" and "Alive". There is a story about the Hrim’s kryyivka in the «Alive» film.
How to get there?
You can get from Nadvirna town in the Ivano-Frankivsk region to the village of Maksymets by bus Nadvirna - Bystrytsya or by car. Then you should walk to Bystrytsya village untill you see turn to the left with a signpost about the bunker. Berezovachka Mountain is located in the forest area of Gorgany Nature Reserve, so you will need to take a pass permit. The trail to the «Hrim» is quite difficult with a rapid climb. It will take 3-4 hours to travel.
WARNING! The coordinates indicated on the site are approximate, with an error of up to 200 m. You can help us by pointing out the exact coordinates.
If you decided to visit Hrim's kryyivka, we recommend you to contact the Gorgany Nature Reserve office for the best route for you.
+38 (0347) 5-204-83, +38 (0347) 5-204-82
Translated by Kateryna Polishchuk
Write a comment for this product!
Interesting places of this region (0)
Copyright MAXXmarketing GmbH
JoomShopping Download & Support
Search